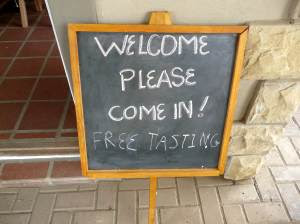 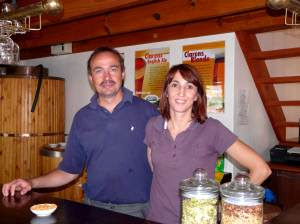 One could almost feel the trouble brewing in the village recently when the rumour spread that Clarens Brewery operating from Clementines restaurant had closed down and no longer would locals and visitors alike be able to quench there thirsts on there refreshing blend of beers and cider. I immediately called Natalie from Ash Creek farms and she assured me that the brewery was not closing down, only re-locating. “As per the norm whoever heard the story first got it horribly wrong” A collective sigh could be heard “Its true, I heard it myself”

It was then I decided that someone needed to record the recent history of this micro - brewery as well as its welcoming owners, so over a few brews and perhaps just one or two ciders I eventually got the information I needed. Having initially set up at Witblitz in December 2005 with a 150 litre brewery Natalie and Stephan Meyer decided to move to Clementines some six months later and upgraded to a 300 Litre brewery, soon finding themselves brewing more and more often as the appreciation for craft beer grew amongst locals and tourists alike as I type this the brewery is now brewing over 2000 litres per month and the demand just seems to be growing.

But what makes an IT specialist and a Systems Engineer decide to make beer and open a brewery and how did it all start I asked eagerly quaffing down my second English Ale. Natalie explains. Having established our apple and cherry orchards just outside Clarens eight years ago a decision was made to try our hand at brewing cider in an attempt to use the culls out of the orchard, “bet your thinking what’s a cull, (I’m right aren’t I) “Cull is fruit that cannot be used as it has either fallen on the ground or has some sort of a blemish that makes it unsellable” Having no brewing experience did not deter them and they joined the Worthogs club of micro brewers and started the slow process of trial and error, with cider only being brewed in the winter they had to brew ten or so trials and hold the best results over to the next year. Over the next four years their friends where subjected to the worst rotgut imaginable, however they persevered and three years ago came up with the correct blend that is today perhaps one of the nicest ciders I have ever had the pleasure to drink. Red Stone cider named after the Rooiberg mountains in whose foothills the apples flourish is a delicious refreshing blend made from culinary apples, totally opposite from a traditional cider that is made from crab apples, it is brewed on the farm once a year in May so that only the freshest apples are used.

Ok I slurred “just a little” that’s the cider taken care of, what about the beer?. This time Stephan takes up the story, Natalie and I are both ardent beer drinkers and during our apprenticeship at Worthogs we sampled some of the best craft beer that this country has to offer, in fact one of Worthogs brewers has won the Tri-nations competition between SA, Australia and New Zealand for the last two years (perhaps the Bokke should start drinking craft beer). We decided to try our hand at brewing beer and started out by brewing full grain beers with a 40 litre brewery, having had the experience brewing cider and with the knowledge picked up at Worthogs we where able to offer our friends a much more palatable product and decided that we should give it a go commercially, establishing a brewery in Clarens was the obvious choice, especially since we considered it an ideal addition to the villages many tourist attractions, also it was to become the first commercial micro brewery in the Free State.

The move from Clementines to the Highlander centre was a decision made to give the brewery more exposure and give us more space to brew, Clementines will still be an outlet selling our beer and cider “as the garden area at Clementines is perfect as a beer garden”, explains Natalie, while Stephan pores me another beer. So apart from the Red stone cider what beers are you brewing at the moment I remember to ask. Our standard beers are a Blonde ale, which is a refreshing full bodied ale with a biscuity after taste, there’s a traditional English ale with a lovely caramel finish and then we have a creamy stout with roast coffee flavours. Clarens Brewery are also looking at having seasonal beers from time to time, such as the Weiss beer now for sale. If you have never tasted Weiss beer do yourself a favour and do just that, the taste buds wont know what has hit them.

Future plans for the shop are to stock imported beers from Belgium as well as beer paraphernalia and memorabilia, at the moment the shop is open on weekends only, but this will change once licence restrictions relax. All the beers as well as the ciders on tap are also available in bottles for either personal use or as gifts to family and friends. Even though the brewery only moved premises late last year business is brisk and if you are in the village, a visit to this micro – brewery is a must, just ask any of the locals where the Highlander centre is and enjoy a hand crafted beer or cider, you wont be sorry.

I always enjoy researching my articles for the blog, be it crawling through bat infested caves or climbing up mountains, but I have to say this was probably one of the most enjoyable assignments I have had for many a year, the telephone call to my wife to ask her to come and collect me was however not as pleasant, “but that’s another story” 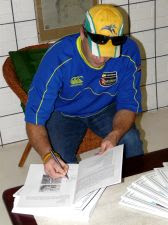 The Clarens Chronicles: Stories from the Jewel of the Free State
R 120.00

Village Idiot
Port Elizabeth, Eastern Cape, South Africa
I am 50 years young I have a daughter called Gabriella who is 18. I am Proudly South African. I used to live in a small drinking town with a fishing problem but moved to Port Elizabeth in 2009. I have had a pretty interesting life and up until a few years back when a good friend of mine persuaded me to look at writing a political/military book I had never ever thought of writing for pleasure. Not that I think that I am a great writer, but I do enjoy it and I have recently published my first book "The Clarens Chronicles" available from stephend@nosa.co.za. I ride a Harley Davidson 1200 Sportster and I ride as often as I can (not often enough)Having purchased a big boy scooter a couple of years back I am travelling all over PE and surrounds on two wheels and find it awesome. Hopefully with this blog you will get to know more about me, my family and my friends. The Born Warriors Blog is one that i have set up to help collect stories and information on those men and women who have contributed to military history but have never received the credit they have deserved.